TORONTO -- Don Tapscott, upcoming AFP 2017 speaker and one of the foremost experts on distributed ledger technology, provided attendees of the Payments Canada Summit with a look at how blockchain could reshape the way payments and financial services work in the near future.

According to Tapscott, we are entering into a “fourth industrial revolution”—a new paradigm in technology with a new modus operandi for banking and payments. At the heart of this new paradigm is blockchain. “Blockchain represents nothing less than the second era of the internet,” he said. “It can be at the heart of a new financial system if we do it right and we time it right.”

As Tapscott explained, blockchain is an “internet of value”. Anything of value—money, music, votes, stocks—can be stored, transacted, settled, recorded and managed in a secure and private way. For payments, blockchain provides a way to cut out the middleman in cross-border transactions. For example, people can send bitcoin payments, peer-to-peer. But Tapscott was quick to say that he does not believe that intermediaries will go away, rather, blockchain provides an opportunity for them to change the value they create.

Furthermore, there are no three-day settlement periods with these types of payments because the payment and the settlement are the same activity. “I think this is the way to get to real-time,” Tapscott said.

He provided a list of blockchain-enabled possibilities for a next-generation payments system. Blockchain could allow for:

On security, blockchain is particularly revolutionary. Tapscott noted that virtually all companies today use traditional server technology for their data, and all of it can be hacked. As we just saw in the WannaCry ransomware incident a couple weeks ago, failing to download a patch in time can make your entire system susceptible to dangerous malware. 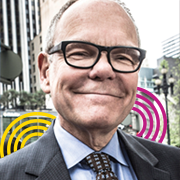 Conversely, blockchain provides a way to secure transactions that is much more difficult to hack than what we use today. Each “block” that makes up the “chain” references the previous block. So in order to hack into a particular transaction, “I’d have to hack that block plus the entire history of blocks on that chain—not just on one computer using the highest level of cryptography but across millions of computers, all simultaneously, while the most powerful computing resource in the world is watching me,” Tapscott said. “I’m not saying it’s unhackable but it’s infinitely more secure than the kinds of computing systems we have in our banks today.”

Of course, any new technology is met with a share of skepticism, and blockchain is no different. Tapscott provided a list of “showstoppers”—ways that blockchain could fail. Among them are predictions that powerful incumbents of the old paradigm will “usurp” it, that governments will stifle it, and that criminals will use it. While he acknowledged these are real risks, he believes that all of these factors are minor glitches that will work themselves out in time, if they happen at all. And some might not—for example, many governments have opted to hold off on regulating blockchain to keep from stifling innovation.

Once all the kinks are worked out, Tapscott sees blockchain actually overhauling the global financial system. He provided a list of financial services that could effectively be “replaced” by blockchain. He affirmed that not all of them will be supplanted by this new technology, but any of them could be.

Tapscott concluded that whenever the idea of a new paradigm is bandied about, it’s typically met with a cool reaction. “Leaders of old paradigms have problems embracing the new,” he said. Nevertheless, he believes that “we have everything that it takes” to create a new reshape financial services and payments with blockchain. “All we need is the leadership and the will,” he said.