Mike Rowe: Get Dirty and Find Your Peripeteia

SAN DIEGO, CALIF. -- Treasury and finance professionals typically aren’t the type of people who get their hands dirty at work. So it may have come as a surprise when Mike Rowe, who has made a career out of getting his hands dirty, was announced as the keynote speaker for AFP 2017. But as he explained Sunday afternoon, his popular show “Dirty Jobs” began with an epiphany that led to a turning point in his career. Financial professionals can surely relate—many of them got to their chosen careers in a very roundabout way.

Rowe took the audience back to his early days working for CBS as the host of a show called “Evening Magazine” in San Francisco. The show has always been hosted from opera houses and other fancy venues. But one day, Rowe decided to step out of his comfort zone and host the show from a sewer. He described in graphic detail his adventure in the rat and roach-infested San Francisco sewer: “The smell—It’s what you imagine, only worse,” he said. “It’s in your eyes. It’s in your hair. It’s on your teeth.”

He ultimately found himself swarmed by massive roaches and rats during this little subterranean journey, which resulted in him faceplanting into some very unclean water. Thereafter, having failed spectacularly at hosting his show, he helped the sewer inspector, a man named Gene, replace bricks in the sewer.

At the end of the night, he assumed (correctly) that his stint hosting his show was over. But after reviewing the film of the episode, he realized he stumbled onto something. The footage was hilarious and gruesome and oddly beautiful. What was most engaging was his conversation with Gene. “He loved his job. He was also funny and self-deprecating in a way that I hadn’t given him credit for or expected,” he said.

After that, Rowe had a realization that changed the trajectory of his career and his identity. It was a peripeteia—a turning point that changed his entire outlook. “I had a peripeteia sitting at my desk in CBS,” he said. “I realized at that moment, right there, that I’d never be a host again. I decided that I was going to be an apprentice. I didn’t know what that meant, but I decided I was done impersonating hosts and pretending to be smarter than I am. 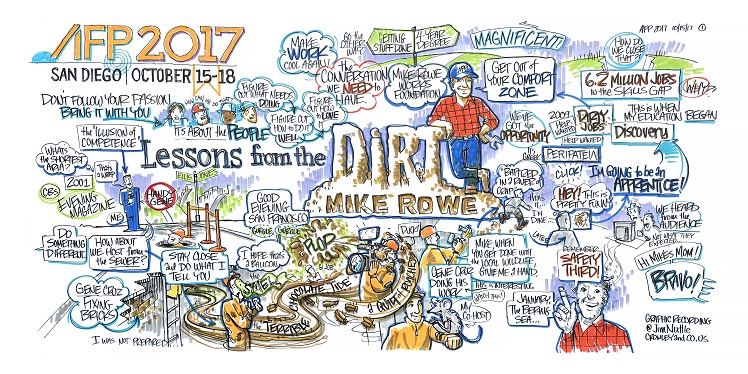 After airing the episode and subsequently being fired, Rowe began reaching out to various TV studios with a new show idea—one in which he would act as an “apprentice” to different blue collar workers, learning their trades. Ultimately, the Discovery Channel took a chance on the idea and that’s how “Dirty Jobs” was born. “I went to work at 43 years of age in earnest, for the first time in my life. My crew and I shot in all 50 states for 10 years.”

After high school, Rowe went to a community college for two years, and then to a university where he completed his degree in communications. “My education didn’t start until the sewers of San Francisco. And it actually hasn’t stopped,” he said. “It happened because I had a peripeteia.”

After the 2008-09 financial crisis, when he began to believe that the United States also needed a peripeteia. He saw employment numbers skyrocketing, yet also would see “Help Wanted” signs all over the United States.

“I felt like there was a narrative going on in this country that nobody was talking about,” he said. “In 2009, there were 2.3 available jobs that, for whatever reason, companies couldn’t fill. At the same time, we had something like 15 million people unemployed. There’s this belief in this country that unemployment can be eliminated if we just create more opportunity. That’s nonsense, isn’t it? Today, there are 6.2 million jobs in the skills gap sitting there—75 percent of which don’t require a four-year degree.”

Eventually a Wall Street Journal reporter contacted him for an interview and asked him any thoughts on how unemployment numbers were rising while the skills gap was widening. He felt challenged to actually do something about the problem, which ultimately is what have birth to the mikeroweWORKS Foundation. “That’s why today, we continue to make the most persuasive case for thousands of good jobs that exist that don’t get any love,” he said.

Added Rowe: “We have to make work ‘cool’ again. We have to make it aspirational again. My baptism in a sewer led to my peripeteia, which brought me here. If you look back in your life, you’ll find a peripatetic moment. You are the star of your own tragedy, and it’s only a matter of time before we come face to face with the undeniable truth of our own reality.”