In the wake of the coronavirus crisis, both the Federal Reserve Board and the Department of the Treasury have taken steps to shore up money market funds. The actions come after a recent strain on prime funds has investors panicking.

On Wednesday, the Fed announced that it has established a Money Market Mutual Fund Liquidity Facility (MMLF) to ease the recent spike in redemptions by investors. Meanwhile, the Treasury asked for approval from Congress to secure the MMF industry by temporarily suspending restrictions on the Exchange Stabilization Fund.

Deborah Cunningham, CFA, Executive Vice President and Chief Investment Officer of Global Liquidity Markets for Federated Hermes, believes that this action by the Fed will be “absolutely effective” to support the MMF industry and corporate treasury departments’ access to funds. “This is just a broader version of the AMLF that was introduced in 2008 and worked quite well,” she said. “The dealers are onboard and beginning to process these trades currently in the marketplace. The Boston Fed is still working on getting the dealers their funding, but it’s up and operational.”

With a pandemic spreading, interest rates dropping to zero and a possible recession or even a depression looming, high-quality issuers (banks, asset-backed commercial paper issuers, corporate commercial paper issuers) are beginning to feel stress even though they don’t currently have any major credit concerns. “To make sure that the volatility and less than efficient functioning of that market is stopped, this facility is the exact answer,” Cunningham said.

Christina Kopec, Global Head of Liquidity Solutions Product Strategy for Goldman Sachs Asset Management, agreed that the Fed’s action is another measure to help stabilize the market. “Heading into this week, we saw the Fed's rate cut, and then the announcement of its commercial paper facility,” she said. “That was the first broad acknowledgement that if issuers didn’t have access to liquidity, the Fed was willing to act in a role as a liquidity provider. Furthermore, their facility with primary dealers was also meant to suggest that they were open to helping to facilitate liquidity with the broker-dealers directly.”

Goldman Sachs sees the MMLF as helpful because it is specific to prime funds, whereas some of the other measures that are being implemented are for other market participants or issuers themselves. It also addresses one of the constraints that stemmed from further opening up liquidity in the market, which was the banks and broker-dealers having capital requirement relief and bearing no credit risk.

“So if banks and broker-dealers are either unable or unwilling to take the assets that funds are selling, this was an important way to facilitate the flow of both assets and cash to the funds, while not exacerbating any balance sheet issues with the banks,” Kopec said.

These actions by the Fed and the Treasury are largely due to prime funds seeing major outflows this week, losing more than 10% of their total portfolio assets. As a result, Moody’s global outlook for MMFs has gone from stable to negative, though it also said that U.S. institutional prime fund duration and credit profiles remain solid.

Prime funds are already a shadow of their former selves; the implementation of a floating net asset value (NAV) in 2016 caused many investors to exit prime funds entirely. Some have come back in the past few years, though this latest shakeup may keep investment in prime funds depressed for years to come.

“We've seen noticeable outflows from prime money market funds, which are the credit or general-purpose type that buy commercial paper,” said Peter Crane, President of Crane Data. “Over the past week, we've seen $85 billion come out of prime. They're still just above $1 trillion in size, so as a percentage basis, it's not life-threatening. But those steady outflows, coupled with the freezing of the commercial paper markets, are starting to threaten money funds from multiple angles.”

Crane added that had the Fed and Treasury not stepped in, eventually, the outflows would have triggered gates and fees on some funds and may have even forced some funds to “break the buck” like the Reserve Primary Fund did in 2008. “As we saw in 2008, the Fed and now the Treasury thought a better scenario was to support the market before a full-scale run develops,” he said.

The stimulus already seems to be working; outflows have begun to decrease. “Similar to the battle against the virus itself, you don't need to stop it, you just want to slow it, so your preparations and your reaction can catch up,” Crane said. “Money funds can handle steady outflows. It's just sharp, sudden ambitious outflows that present a threat. And so even if the outflows continue, at the present course, they'd be fine. You just don't want them accelerating, and this should stop them in their tracks.”

There have been “massive flows” into government funds this week, Crane explained, but he doesn’t expect that to continue. Government funds have their own issues, such as yields that are pinned close to zero and could even go negative in certain cases. “You're not seeing those strains just yet, but you could eventually,” he said. “One of the ways to stop a run is to make any place you're going to run to equally unpalatable, and that's about to happen.”

Cunningham also isn’t too concerned that corporate investors will completely exit prime funds again. “We’ve definitely seen higher outflows that normal, but historically speaking, this is also a period of outflows as we’re approaching the end of the quarter,” she said.

KEEP CALM AND CARRY ON?

Cunningham believes the current crisis underscores the need for treasury departments to maintain liquidity. “That way, as we go down this coronavirus path, from an economic perspective, we can be comforted that money market funds are a place of safety,” she said.

For treasury professionals having flashbacks to 2008, Crane pointed out that the market has changed substantially since then; first of all, it’s a smaller overall issue because the markets for both commercial paper and prime funds are half the size that they were in 2008. Second, the investment portfolios are drastically different than they were back then.

“Almost every investor in prime money funds also has a government fund and uses government funds for their transactional functions, payroll, etc.” he said. “So prime is sort of the second-tier of liquidity or even third-tier liquidity on top of that. And while the gates and fees have never been triggered and never been tested, if a gate did come up, it presumably wouldn't be critical for any of those big investors because they've already got a big pool in a more liquid government fund.”

Like you, your peers are also making adjustments to their operations during the coronavirus crisis. Continue the conversation with them at AFP Collaborate. 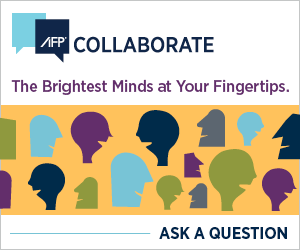