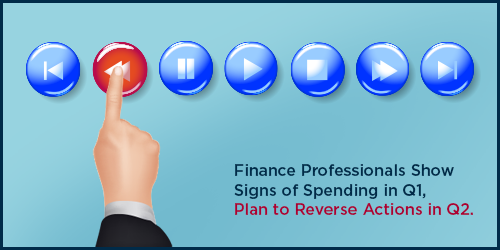 American companies said they would deploy their cash in the first quarter of 2016—and they did, according to the latest AFP Corporate Cash Indicators® (AFP CCI).

During the first quarter of 2016, U.S. businesses began to deploy some of their cash reserves, though not at a significant rate. The quarter-over-quarter index decreased by 17 points to -1, suggesting greater willingness to spend than in the prior quarter. This is the second consecutive quarter that organizations’ cash behavior aligned with their expectations entering the quarter. The year-over-year indicator is +10, signaling organizations were focused on building their cash reserves in the past year.

Published each fiscal quarter, the AFP CCI measures changes in corporate cash holdings quarter-to-quarter and year-over-year, as well as the expected change in short-term investment and cash accumulation in the coming quarter.

Finance professionals are poised to increase their cash reserves during the second quarter of 2016. The forward-looking CCI measure, tracking expectations in the change of cash holdings during the current quarter came in at +7, an increase of eight points from what was reported in January’s CCI report and up eight points from a year earlier.

The CCI measure for short-term investment aggressiveness indicated a slightly more aggressive investment posture compared to last quarter, increasing from a reading of -3 to +1 during the first few months of 2016.

Strong job numbers, declining unemployment and a far less severe winter compared to years past instilled some confidence among business leaders in the U.S. in the early months of 2016. However, results suggest they plan to reverse course and resume accumulating cash reserves in the second quarter. The recent terrorist attacks in Europe and a very uncertain domestic political environment in a general election year are likely contributing to the prevailing uncertainty.

“The April CCI shows that corporates are prepared to deploy cash holdings, but only under the most strategic circumstances,” said AFP President and CEO Jim Kaitz. “Unless there is a clear opportunity, organizations continue to be content to hold on to their cash in case of emergency.”

AFP began collecting quarterly data in January 2011 and has now collected 22 data sets. See http://www.afponline.org/CCI/ for answers to frequently asked questions. The next set is slated to be published July 25, 2016.