When It Comes to Snow Forecasts and FP&A, Two Approaches Are Better Than One

The East Coast is suffering through a Nor’easter this week, a particular type of storm that blows wet air from the Atlantic Ocean over land. For this week’s storm, the wet wind was met with cold air that blew in from the Midwest, resulting in blizzard conditions in eight states (so far).

I have been living with the storm for a week now, as meteorologists went through shifting forecasts on which day the precipitation would arrive, and how high the snow would pile up.

The accompanying graphic came from a DC-area forecast that shows predictions from three different weather models three days before the storm. 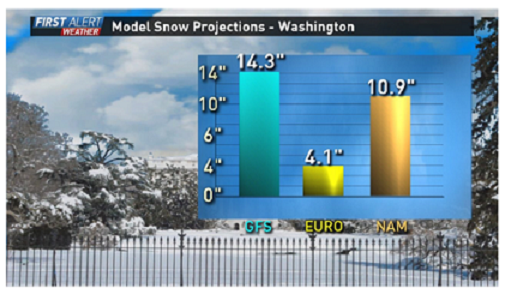 The probabilities assigned to each model were roughly equivalent, even though the spread was 10 inches. Now imagine that you are the state emergency management team trying to interpret this forecast. Is it helpful to have three models instead of just one official prediction?

I believe the answer is: Yes. The goal of forecasting is to align your organization’s resources to act in the marketplace. Forecasting with precision is hard, and we can get caught in a trap of pursuing the one true, right answer when we cannot deliver that perfect forecast. Instead, we should focus on preparing our ourselves with a range of options and quick reactions to a fluid situation.

We are looking at a total of four inches of snow by my house; going back to the graph and the range of forecasts, simply averaging them would yield a 9.8-inch prediction. Two of the models were significantly over-forecast. But if you are the emergency manager who is trying to determine how many drivers and trucks to mobilize, it is more helpful to know the potential outcomes and have several plans ready.

We can do this in FP&A by having several forecast models ready. Here are a few approaches:

The most common approach is a single, preferred model that is the main embodiment of the company forecast, is highly detailed, and contains the input of the entire company. Usually this the incumbent survivor of years of tinkering. At the same time, run several challenge models that are constituted differently, perhaps a survey of people close to the market, or a different set of input and correlations. The goal is to challenge the established wisdom of the preferred model, potentially point out new drivers that are relevant, but not part of the preferred model, and generate management discussion around the validity of the model.

A second approach is to have a “cloud” of forecasts and plans, keeping options open as long as possible before taking action. As in corporate finance, there is value in having an option to act or not act. While recognizing that not all businesses can be this flexible in the short-run, this type of multiple forecasts can be created over any time period.

The point of multiple models is to remind yourself that forecasting is difficult with so many variables, black swans, known unknowns and unknown unknowns. Models can grow old, reflecting the time and situation when they were built. One way to keep them relevant is to challenge them with other models.

Bryan Lapidus, FP&A, is a contributing consultant and author to the Association for Financial Professionals. Reach him at BLapidus@AllegianceAG.com.