Both inside and outside of finance, FP&A — or financial planning & analysis — is often poorly understood. You might even know it by a different name, depending on your company or location. Regardless, the goal of FP&A is always the same: to optimize the use of capital and resources by supporting business decisions.

As the role of the CFO evolves and new tools unlock new capabilities for finance, FP&A is primed to lead the charge. In a companion webinar to AFP’s FP&A Handbook: The Who, What and Why of FP&A, underwritten by Jedox, Tarun Chopra, president & CEO of Clements Worldwide, Ken Fick, vice president of financial planning analysis at Citrin Cooperman, and Alina Traistaru, vice president of finance at University of Arizona Global Campus, joined Bryan Lapidus, FPAC, AFP’s director of FP&A practice, for a discussion centered around questions about the value of FP&A and how the profession can grow.

How does FP&A support the CEO and senior executives?

The role of the CEO — as well as other senior executives — is “to make a series of decisions,” according to Chopra. The finance team, in turn, supports senior executives by helping to inform their decisions. “You always have a gut feeling whether a decision is right or wrong, but to give it some shape is where your finance team is the most important.”

Finance gives form to intuition, providing justification for a decision and putting parameters around it. “At the end of the day, it’s about making better decisions,” Chopra said. “What finance is doing for me, as a business leader, is help[ing] me shape and put boundaries around those decisions, help[ing] me make those decisions in a more objective manner.”

While analytics are crucial to making informed decisions, sometimes executives can get stuck in “analysis paralysis,” in which they continue to seek more information without making a decision. The problem, as described by Fick, is that “you’re never going to have all the information and it’s never [going to] be perfect.” FP&A professionals need to be comfortable with ambiguity and leverage their soft skills to help drive senior executives toward a decision.

“Every moment matters,” Traistaru said. “The later you make a decision, the more drastic measures you have to make in order to keep the company financially stable.”

How should FP&A deliver analysis and insights to the business?

“When a businessperson comes to you or a CEO comes to you with a question, more often than not, the question that they ask you is not the real question,” Chopra said. “There is something deeper than that.”

That something deeper ties back to another question: Why are we doing this? By asking businesspeople and executives what they are going to use the data for, FP&A professionals can help them identify their real question and define the information they need to answer it. Chances are this information is going to be different than what they had originally asked for.

Another thing to keep in mind is that different people have different needs. For example, an executive may only be looking for high-level information, while a businessperson may need detailed numbers to help tell a specific story. By starting with a conversation, FP&A professionals can tailor their analysis to specific needs.

FP&A is both a box on the organization chart and the roles and skills required for planning, performance management and financial analysis. See who is doing FP&A at your organization.

But over the years, he has also noticed a trend: “Maturation is leading to specialization. The job itself is being pulled apart into constituent roles, each demanding higher levels of competency.” Whereas in the past, one person may have been doing all of the FP&A work using one tool (Excel), more companies are now separating planning from analysis from performance management, or data roles from partnership roles.

This maturation of the profession is reflected in specific education and content. Traistaru described going to conferences in the past where no one knew what FP&A was, but now there are specialized FP&A conferences and tracks. “It’s just because it was not defined,” she said. “It was still developing.” She pointed to certification and specialized training as examples that the field has matured.

While education about FP&A has come a long way, the panel agreed that defining FP&A is still a challenge, in part because its breadth can make it ambiguous.

“In my experience, I think that FP&A is everything that is not defined, particularly as accounting or tax or SEC reporting,” Traistaru said. “I feel like FP&A is the glue that is everywhere and touches everything.” Though the ambiguity of FP&A does not always affect Traistaru, it does become pertinent when she has to write a job description.

Other factors that can influence what FP&A looks like include organization size and culture. Chopra explained that FP&A is more structured at a larger organization, where there tends to be more definition to roles. However, in a smaller mid-size organization, everyone, including FP&A, wears multiple hats: “You can define FP&A, but you are not going to be within the boundaries very long, because there’s just too much that you have your hands in.”

What most inhibits FP&A from being as successful as you would like?

When asked which problem(s) most inhibited FP&A from being successful, nearly 80% of webinar participants chose having too many priorities. Data challenges came in second at over 65%, and over half of the audience chose “projects taking longer than expected.” 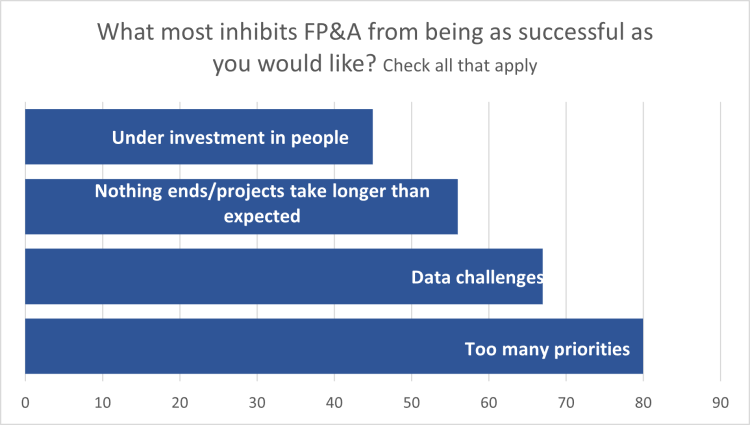 Traistaru noted that the ability to afford a qualified FP&A team is directly related to the problem of having too many priorities. “We can't afford not to hire a person because we are losing opportunity,” Traistaru said. “If you don't have the people, then the next challenge is [having] too many priorities.”

Fick agreed with many webinar attendees that data challenges are an issue for FP&A — namely, having clean data and having enough of it. “You don’t know necessarily when you need it or need more of it,” he said. “You know when you don’t have it.”

Beyond capturing the data, Fick also pointed to data analytics as an area he frequently has to train his team in.

What else can FP&A do a better job at communicating? Its value to the business. As Chopra described, “It’s the most undersold function within finance.”

Explore the career paths of the webinar panelists

A career is seldom a ladder of vertical promotions in one office. More often, it’s a network of directly and indirectly related moves. See the unique journeys several different FP&A leaders have taken.