The Many Faces of FP&A: Which One Are You? 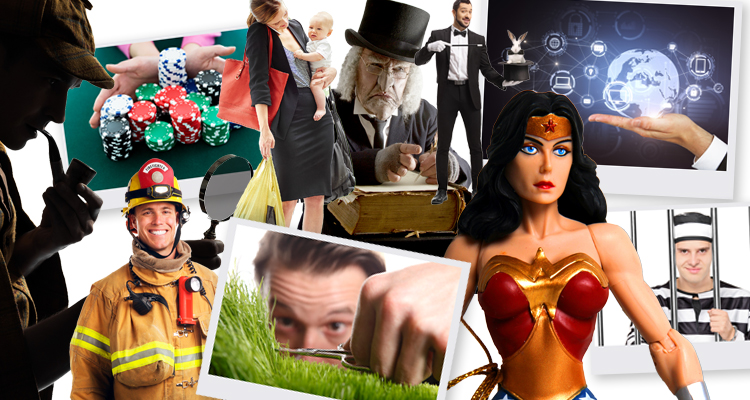 In our roles as FP&A professionals, we carry out our craft under the guise of a multitude of archetypes. In a fun — and telling — exercise, we recently presented the FP&A Advisory Committee with a slate of images and asked: Which one best describes you as you’re engaged in the FP&A function at your organization? Below is what they had to say.

In her current role as vice president and head of M&A for ABM Industries, Kayla Davis said she feels most akin to the gambler. “As we're evaluating companies we want to purchase, we're taking a gamble sometimes. We hope that everything works out well. We do our due diligence, but not all deals are going to be a home run.” Davis went on to say that her time in FP&A “played a big role” in the success she’s achieved in M&A.

Jenn Zinschlag, director of Permanent Search, Accounting and Finance for StevenDouglas, said, “I've at least been four of those images today! I'm an executive recruiter focused on FP&A, so I get to see the crazy world of talent recruitment. I’ve definitely been the person behind bars, feeling like they're jailed, because I've got a couple candidates who have been holding me hostage with offers in their hand for a week. I’m the firefighter, putting out fires from frantic clients asking me what is happening, why is it happening, why can't we secure people, why are senior analysts asking for $150K base. The gambler for sure, negotiating packages and perks. And occasionally Wonder Woman when I find that candidate no one else has been able to find, and my clients tell me they love me.”

Several people chose the busy mom as their archetype. “The lady that's juggling everything, has the groceries, the phone, people pulling on her, that's really kind of what it felt like,” said Carmen Turner, FPAC, and former director of Finance for SwipeSense Inc. “I think that’s how most people feel — that you're always trying to juggle a lot of things at once. And while it can be done, there has to be a structure in place to allow for that to be successful.”

Scott Corvey, Vice President of Finance for Consero Global also feels connected to the busy mom. His company provides Finance as a Service, a fully managed back-office solution, to clients in the investment management space. “Similar to all businesses, many clients say to us, ‘Just tell me what I need to know to run my business.’ I help them understand their cash burn rates, cash conversion cycles, optimization of their assets, compliance, blind spots, obligations ... all the things that help them have confidence in the business and guide their growth.

Said Geetanjali Tandon, senior vice president of Financial Planning & Analysis for Ceridian, “I feel like the magician some days because there is a lot that this team needed and I am pulling rabbits out of hats. They needed someone from FP&A so they can do the analysis work and not just be the ‘personal financial assistance’ of the business. Whatever little thing the business wanted, yeah, we will get it done. I am focusing on understanding where the business payoff is for my team’s efforts, reducing the process stuff we work on, and moving the team to more value-added work.”

“There are so many possibilities, so many different areas where you can apply improvements with your data and your processes, that the ‘hand of endless possibilities’ speaks to me,” said Cathy Jirak, principal and chief operating officer, QueBIT Consulting. “Other times I feel like Wonder Woman because when you go into an organization and show them the art of the possible — because they're so consumed with and buried under their own detail and data — when you can show them some way out, you’re Wonder Woman.”

“I find that a lot of what I'm doing is bridging the gap between data and analysis and finance and IT,” said Ken Fick, vice president of FP&A at Citrin Cooperman. “I recently had to get access to the system of the server for our data warehouse. I started going through to see what we had, and they were thrilled that I knew how to write basic SQL. But trying to reconcile the data, and then having accounting and finance pulling reports down and doing mathematical gymnastics to produce things — we need to get more efficient. So the ‘hand of endless possibilities’ resonates with me because we have multiple points of data all over the place, different definitions, and people are trying to hoard capital to get a planning budget process done.”

Get an inside look into real-life FP&A with The FP&A Handbook: The Who, What and Why of FP&A. It contains case studies and career paths of current FP&A Professionals around the globe. Check it out here.

Joe Groat, FPAC, director of FP&A chose this archetype also.  “There are so many moving parts in FP&A at U.S. Steel, and with the volatility in the commodity markets and the global uncertainty around supply chains, we're focused on strategy and optionality and being nimble. And to me, that picture resonates with the fact that there's a lot going on, and it's all about figuring out the best path forward.”

“The glow coming off the ‘hand of endless possibilities’ is like FP&A is for our company,” said Mario Vasquez, FPAC, financial director of The E.W. Scripps Company. “We touch every department, every division, and we're the ones bringing everything together. We tell the story and anything the company wants to do, we're part of. You're looking at M&A, we're part of it, even though we have an M&A division or department. I'm nonstop modeling for every potential action or spend across every department.”

Nikita Miller, FPAC, director of FP&A for The Kresge Foundation has held two opposing archetypes in her career. “When I was in corporate, I would say I identified most with Scrooge — counting all the money and trying to convince people not to spend. Now I'm in a nonprofit space and we encourage people to give away money, I feel like I'm the magician, because I make things happen and people don't quite know how, but they know at the end of the day they get what they need.”

The events of the past couple of years has had a particularly significant impact on the restaurant industry — and therefore the National Restaurant Association, of which Eric Ellis is CFO. “As we’re climbing our way out of the effects of the past two years, I'm Scrooge building back our financial position. At the same time, I’m keeping a close eye on and monitoring our cash and our operating income statement. I am also Sherlock, examining every clue because everybody wants to hire someone, but not everybody is able to be hired. The market is dictating hiring costs at a premium, and it's impacting our operating plan. I could honestly say I've probably lived every one of those boxes within the last six months, but right now I'm Scrooge and Sherlock.”

And then there’s the lone man cutting grass with scissors. “When it comes to setting up a budget, you're basically going through every single line item and GL account. You’re going from having nothing to trying to make something beautiful as a whole, but you have to address each individual part one at a time. There’s a lot of picking and choosing where you're going to attack,” said Frank Chou, FPAC, CTP, Financial Planning and Analysis director, Chou Consulting and Coaching.