The Congressional Blockchain Caucus Wants to Empower the Technology

Washington, D.C. -- Until recently, Congress paid little attention to blockchain and distributed ledger technologies. That all changed when Reps. Jared Polis (D-Colo.) and David Schweikert (R-Ariz.) launched the Congressional Blockchain Caucus in February. Thursday at an industry conference, the two lawmakers discussed their vision for these fintech technologies. Both of them stressed that their bipartisan caucus wants to help blockchain, not burden it with regulatory red tape.

“The goal of our caucus is to raise awareness and be a source of information for our colleagues in Congress,” said Rep. Polis. “There is a convening role that the legislative branch can play.” 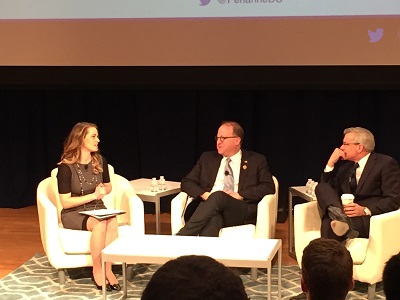 Rep. Schweikert, who replaced original co-founder Mick Mulvaney after he left Congress to join the Trump administration, added that Congress “can be arrogant, and [with new legislation] we suddenly have built a barrier between the next idea.”

Schweikert was keen to distance blockchain from bitcoin. “How do we help our brothers and sisters in Congress understand that this isn’t cryptocurrency?” he asked. “There’s this incredible opportunity out there.”

The Arizona lawmaker urged attendees at the conference—mainly blockchain developers, vendors and financiers—to apply the developing technology to real-world problems. He cited an example of leveraging blockchain to eliminate scheduling snafus for patients at Veterans Administration hospitals. Such a solution would be vastly cheaper than a traditional fix, he said.

“They’ve spent $286 million on scheduling software that you can do for a fraction, and I can see the date stamp of when the appointment was made,” Schweikert said. “It’s not a blockchain solution. It’s a scheduling solution that is provided by blockchain. These are actual, practical solutions that I’m hoping to do with the Blockchain Caucus. It’s time to start rolling out product.”

Polis noted that the Blockchain Caucus has grown to 12 members of Congress, and he believes it will continue to grow as more lawmakers learn more about the technology. “Congress reacts to what’s happening,” he said. “It’s fair to say in five years, blockchain will be more widely deployed.