Energy producers typically get paid more than 30 days after supplying electricity, and once it is used there’s nothing to go back and repossess. That risk has required producers to seek letters of credit (LOCs) from their banks to act as collateral, adding to transaction costs.

The obvious solution is for energy producers to receive payments as soon as possible. To enable that, APN has been testing a blockchain solution as a part of a new digital platform called Verde Blocks that the energy company has developed to facilitate power sellers and buyers finding one another and make payments in practically real-time.

Unlike other payment solutions based on blockchain technology, it does not use volatile cryptocurrencies such as Bitcoin and Ethereum. However, it provides many of blockchain technology’s benefits, including enabling transactions to occur automatically via so-called smart contracts on a 24x7x365 basis and in a highly secure and transparent manner.

APN’s payment solution is powered by New York-headquartered Signature Bank’s Signet platform, in which each “Signet” represents $1 held in a deposit account at the bank. APN signed on to the Signet platform last December and has been testing it as part of its digital Verde Blocks platform, enabling the Commonwealth of Pennsylvania to pay the Lancaster County Solid Waste Management Authority for power produced by its water-to-power facility.

Ultimately, Verde Blocks will enable large power users to post the amount of energy they need over a certain time period, and renewable-energy producers to bid for that contract, the terms of which will be incorporated in a Signet smart contract. The smart contract will then automatically confirm delivery of the power and execute payments for it over that period, providing a transparent and immutably time-stamped record to the parties involved.

Helm said that a current APN client, a large university, anticipates using Verde Blocks soon to seek the first bid to fulfill its power needs, with delivery starting at the beginning of 2020. “On that delivery date the smart contact will start to execute, confirming delivery and transferring money from buyer to seller on a daily basis,” he said.

Although some corporate finance executives may view blockchain technology as risky, APN describes the service as a digital tool tied to the dollar. In addition, power producers must open accounts with Signature Bank, which vets them and applies know-your-customer (KYC) rules and other security requirements. “This brings up customers’ comfort level relatively quickly,” Helm said.

He added that an additional carrot for sellers is explaining that opening an account will enable transactions to settle daily using Verde Blocks, but otherwise APN will sweep payments only once every 30 days.

Power buyers, on the other hand, typically prefer waiting as long as possible to make payments. It’s those delays, however, that result in power producers adopting LOCs and other risk-management tools, significant costs that can be reduced or eliminated when the payments are settled immediately over Verde Blocks. That should enable power producers to lower the prices for buyers.

“There’s an education process there. As buyers better understand the cost of paying later versus right away, we expect more companies will adopt the strategy,” Helm said, noting that APN customers include large companies, universities and government entities.

In addition, power buyers don’t have to open an account with Signature Bank, since they’re actually paying APN as the supplier. Verde Blocks populates digital wallets assigned to them with their payments, which are then passed on to producers via the Signet blockchain.

The strategy behind Verde Blocks is to accommodate a quickly evolving energy industry, which once was highly centralized among large nuclear-, coal- and natural gas-fired power plants, and now includes many more wind, hydro and solar plants. “Many companies have pledged to be 100% green in the next 10 years, but they still want to buy competitively priced power,” Helm said.

Verde Blocks’ use of blockchain and smart contracts for payments is especially appropriate in the energy industry, Helm said, because the product doesn’t require physical inspection and customers purchase power repetitively. In addition, independent system operators (ISOs) act as third parties controlling power systems in specific regions, and Verde Blocks can confirm with them daily that the agreed-upon power generation has passed through the system.

“When the two parties have reached an agreement, the power generator schedules the delivery of power into the ISO, and the smart contract confirms that the power has been delivered,” Helms said.

For more blockchain use cases, download the AFP Treasury in Practice Guide, Fintech: Breaking Down the Barriers, underwritten by Kyriba. 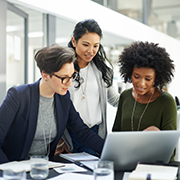 Rate hikes. Economic uncertainty. Supply chain.
We can help make treasury management challenges not so challenging. We offer solutions to help maximize cash flow, increase automation and manage risk—and a banking partner to make sure those solutions grow along with you.
See how we can help.