When financial professionals put spreadsheets or tables of numbers on slides in their presentations, they have instantly put themselves at a disadvantage when it comes to communicating effectively to most audiences, especially nonfinancial audiences. Most audiences don’t like numbers as much as financial professionals do. They want to understand the message behind the numbers and they want to see it illustrated visually.

This presents a problem for most financial professionals. How are we supposed to create visuals when all of our training is in financial analysis and reporting? We aren’t graphic designers, nor do we ever want to be. As an engineer with an MBA, I have figured out a method that any business professional can use to select a visual for their message. No graphics background or skill in art is necessary.

All about the message

Finding the right visual starts with being very clear on the message we want to communicate. The survey participants said that is what they really want to know, so be very clear on the story the numbers tell. I suggest you write each key message in your presentation as a sentence. Think of these as the headlines of the articles in a special edition of a newspaper that is reporting on your presentation. If all people have time to do is read the headlines, they will still grasp the key messages you want them to know.

These headlines become the headlines of the slides in your presentation. Instead of simply using a title such as “Q3 Margin by Territory”, use a headline that summarizes the message you want the executives to know about the margins, such as “Most territories below margin goal in Q3”. Now the executives know the issue and you can discuss what to do about it. Instead of “September Expense Analysis”, use a headline like “Expenses under budget in September” so the executives know this area is under control and can focus on areas that do need their attention.

Once you know what your message is, you can then select the appropriate visual. I have organized 66 types of visuals into 30 groups and sub-groups under the six categories of visuals that messages in business presentations can be organized into. Let me illustrate some of the most common groups of messages and visuals that financial presenters can use to replace spreadsheets on their slides.

Comparing values to a standard

One of the key messages financial presenters need to communicate is how results compare to a standard, such as a goal or target. Often the headline or what the presenter says will include words or phrases such as: above, below, goal, target, standard, or average.

If you copy a table of numbers where one column is the measured results and the second column is the goal or standard, you make your audience do math. They have to compare the two figures in their head to see which values are above or below the standard. Remember that audiences don’t like numbers as much as you do, and they won’t do the mathematical work to figure out your message.

Instead, use a visual that shows the comparison so it is easy to understand. One type of visual is a dashed line on a column graph. 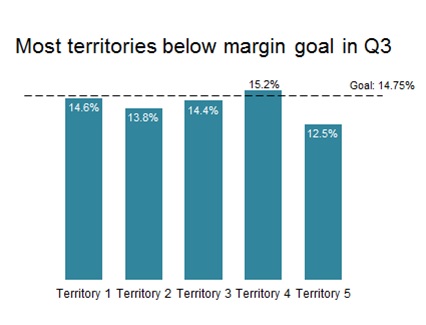 As you can see in the example above, the columns represent the margin in each territory in Q3, and the dashed line represents the goal we had set for all territories. Only Territory 4 managed to meet or exceed the goal in Q3. The audience does not have to work to figure out the message, the visual makes it easy to quickly comprehend.

Comparing values to each other

Another common message is to communicate the comparison of values to each other. The headline or presenter’s explanation often includes words or phrases such as: best, worst, most, least, highest, lowest, largest, or smallest. It may also include words or phrases that refer to the relationship between the values, such as: previous year, previous quarter, last year, same quarter last year, projection, budget, or plan.
Similar to the message about comparing to a goal, using a table of numbers makes the audience do calculations in their head, which they are unlikely to do. Instead use a visual.

If the values you are comparing are different by an order of magnitude or more, consider using a proportional shapes visual instead of a standard graph. 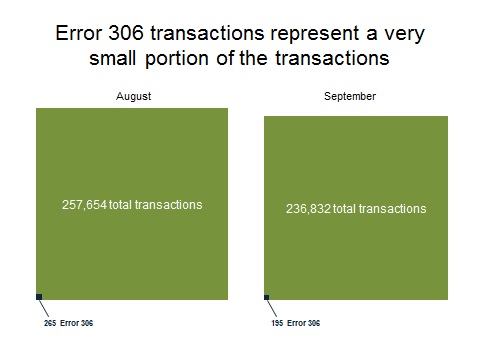 In this example, since the difference in the values is so great, a visual that can represent the value using two dimensions (a square in this example) shows the difference better than a visual that uses only one dimension, such as a column or bar graph. The number of transactions with an Error 306 is tiny compared to the total number of transactions. By showing this with each square proportional to the value it represents, the stark contrast between the values is instantly clear to the audience.

Do you need some fancy graphics software, a graph plug-in, or a data visualization programming language to create the types of visuals I have shown in this article? No. The examples above were created in PowerPoint 2010 without any additional software or tools (they could have also been created in Excel). You already have the tools you need to create impactful visuals for your financial presentations.

As a presenter of financial information, you can give your audiences what they want: a clear, compelling message illustrated by visuals instead of spreadsheets. Focus first on the headlines for your key messages, then select the visuals that make it easy for the audience to understand the story the numbers are telling.

Dave Paradi is a presentation expert and an author of eight books on effective PowerPoint presentations. He recently spoke at the 2015 AFP Annual Conference in Denver. Learn more at thinkoutsidetheslide.com.