Scott Kelly: Hard Work is the Best Part of the Job

During the closing session of the 2016 AFP Annual Conference in Orlando, astronaut Captain Scott Kelly provided attendees with a glimpse into what it’s truly like to boldly go where very few people have gone before.

Kelly, along with Russian cosmonaut Mikhail Korniyenko, spent a year on the International Space Station, where they collected data pertinent to future space exploration. Spending that much time in space requires you to do a lot with very little. But as Kelly explains it, the best part of working off-planet is the challenge itself.

“People often ask me what’s the best part of being an astronaut, and having the privilege of flying in space—because I do believe this is a privilege for me to have been able to do this,” he said. “The best part for me is that it’s really, really hard. Space is hard. It’s not an easy thing to do—flying in space.”

Performing any incredibly difficult task begins with having a goal and a plan, Kelly noted. From there, you need to take risks and be willing to make mistakes. And you can’t become comfortable with the status quo. “For me, throughout my career, when I’ve been able to put all these different things together, what I’ve learned is that the sky is not the limit,” he said. 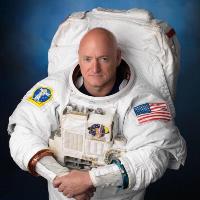 Kelly reflected back on his early life, in which he admitted to being a poor student in school who didn’t study or work hard. However, once in college, he read the book, “The Right Stuff”, which is about the Air Force pilots who later became the original U.S. astronauts. Somehow, the 18-year-old Kelly saw something in those astronauts that he saw in himself. “I decided right then and there that I was going to be like these guys,” he said. “I didn’t know how I was going to do it, but I decided that this was my big goal and my plan.”

Kelly’s plan consisted of very small, manageable steps. He forced himself to study, changed schools, changed his major to engineering, joined the Navy ROTC program and ultimately went to flight school. He studied so hard that if he were flying a small, propeller-driven airplane today and he lost an engine, he would still know exactly what to do. “That’s how much I taught myself to work really, really hard,” he said.

Of course, sometimes no amount of studying can make you an expert. Fairly early on, Kelly learned that he was actually, as he puts it, “a really bad pilot.” He noted that the first time he attempted to land an F-14 Tomcat on an aircraft carrier, he nearly crashed. After failing repeatedly—during the day and not under duress—he seriously questioned whether or not he would ever be able to land planes when it actually mattered.

Nevertheless, Kelly stuck at it. He was willing to take the risks and make mistakes to achieve his goal. Eventually, the Navy teamed him up with an instructor that was proficient at helping pilots improve their landing techniques. After flying with him, it became clear that Kelly was actually pretty good at flying; that all came fairly naturally to him. But that was the problem. He was too comfortable with the status quo, and wasn’t focusing on improving in the areas where he needed to. “I wasn’t making very small, constant corrections,” he said.

The flight instructor eventually taught Kelly to land by forcing him to make those small corrections and never become comfortable with the status quo. “What it took for me was not being comfortable with the way things are,” he said. “And that was a lesson I learned to help me land on the aircraft carrier during the day and at night. And it’s also a lesson I took with me.”

That mindset has stuck with Kelly throughout his entire career, and it can easily be applied to corporate treasury and finance professionals in their daily lives. “You have to make very small, positive, constant corrections if you want things to either get better—or definitely if you don’t want them to get worse,” he said.