How Moneyball Explains the Road Ahead for Finance

In 2014, Sports Illustrated magazine featured a cover photo of a Houston Astros player and the caption, “Your 2017 World Series Champs.” This seemed unlikely, since the Astros lost two of every three games over the previous two seasons. However, the Astros were championing several new business models to revitalize the team in what the magazine called “Baseball’s Great Experiment,” a deep dive into data analytics through all facets of the game.

And then a strange thing happened. It all came true.

Major League Baseball is an example of a trend that mirrors business and society as a whole: large-scale, macro trends in society lead to the development of new capabilities, which leads to new ways of conducting business. This is the basis for a new AFP interactive guide, Your Roadmap to the Future of Finance, where we take this model and lay it out over the three dimensions of FP&A: finance acumen, technology and data, and personal and team effectiveness.

In this article, we will use baseball to explain how the dynamic plays out.

MACRO FORCES: CHANGES HAPPENING ACROSS ALL INDUSTRIES
No surprise, data is fundamentally reshaping sports as in so many other areas. In economic terms, when a good becomes commoditized and inexpensive, we will use more of it. As data became cheaper, we developed more ways to capture it, and more ways to use it, developing data mining tools, analytics, and pervasive deployment of the technology. These are all the same trends we see in other aspects of our lives.

NEW CAPABILITIES: NEW WAYS OF ACCOMPLISHING TASKS
In the sports world, the ability to gather, structure and analyze information at a cheaper level has made it accessible to all teams and allowed them to spend liberally to create a competitive advantage in data analysis. As one technological leap makes the next leap easier to accomplish, this progress has created new capabilities for the baseball world that feeds the analytical engine. For example:

New capabilities to record and analyze information has led to new metrics that employ the data. Baseball is filled with statistics that did not exist a decade ago, including:

NEW MODELS: RE-ARRANGING WHERE, WHEN AND HOW WORK GETS DONE
The essence of “The Road Ahead” is that the broad changes and new data capabilities lead to new models of work for finance, and here we see this playing out in many ways for the game of baseball.

The first significant change in the baseball model has taken on the name of the book, Moneyball. In it, one team, the Oakland Athletics, in 2002 built a competitive team on a low budget by applying advanced metrics to show who brought the most value to a club on a per dollar basis. This overturned the then-traditional logic of player assessments which were based on judgment and intuition.

The second change came in how the game is played, such as defensive shifts that realign players in the field, new hitting styles building on the “launch angle” metrics, and pitching changes that emphasize throwing fewer strikes.

THE ROAD AHEAD FOR FINANCE
Change is happening at a faster pace in all elements of our society, and resisting it will consign our companies and ourselves personally to the bottom of the competitive standings. This paradigm of macro  changes leading to new capabilities leading to new models demands that we be agile in our preparation and response in order to remain relevant. The interactive guide, “Your Roadmap to the Future of Finance” explains how these changes play out for you and your company, and what new models exists for your career.

We've developed your Roadmap to the Future of Finance. Check out the interactive tool. 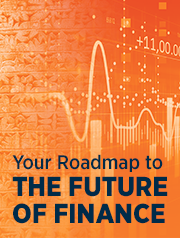