How Effective is Data Visualization?

We live in an age of magic. As FP&A professionals, the amount of data we collect is growing at an astonishing rate. And the tools we have for organizing the data, analyzing it, and presenting the key points are becoming more powerful. So I’ll ask you: Are we presenting information in a way that enables decision-makers to instantly absorb the key points from the data we’ve amassed and make better decisions? I’m not so sure, and one of the culprits is data visualization, a hot buzzword in today’s FP&A conversations.

A tale of two graphs

To illustrate my point, let’s take a look at two graphs. The first graph below, called “Best in Show,” is one of numerous imaginative, gorgeous, graphs found on “Information Is Beautiful,” a website created by David McCandless, a leading apostle of data visualization. 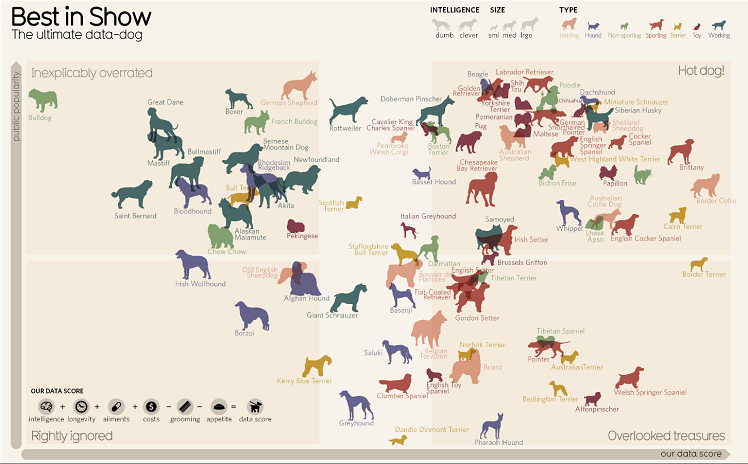 This is a sort of “Gartner Magic Quadrant” for dog breeds. Each breed is positioned along the vertical axis in accordance with the breed’s popularity, and along the horizontal axis in accordance with its “datadog score,” a metric that is basically a weighted average of attributes such as lifespan, intelligence, and cost of ownership. Each data point indicates the breed’s size (by the element’s size), type (its color), and intelligence (left- or right-facing). And each quadrant has a clever name (e.g., “overlooked treasures,” for dogs in the lower-right-hand quadrant).

Next is a graph from the Gapminder, a Swedish website focused on informing people—and correcting misconceptions—about world development. This graph has been famously featured in a TED Talk and a much shorter BBC presentation by Hans Rosling, one of Gapminder’s founders, who unfortunately passed away in the last year. 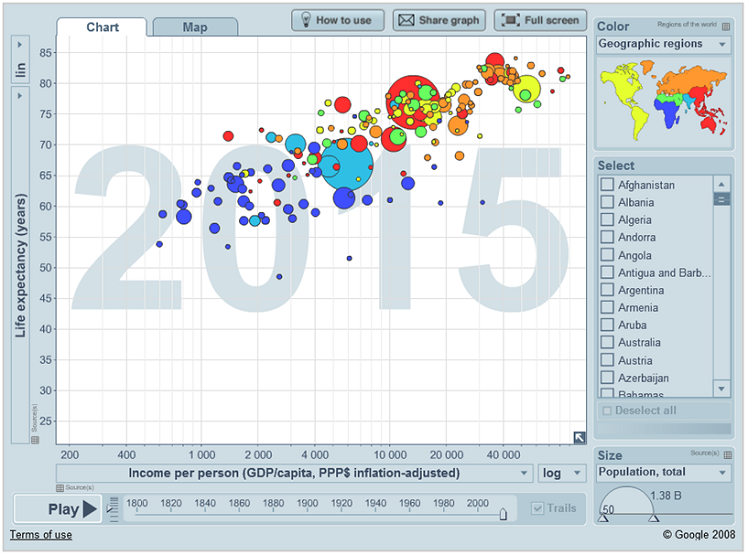 This graph shows each country’s per-capita GDP along the horizontal axis and its citizens’ life expectancy along the vertical axis. This type of graph is called a bubble graph – basically a scatter graph where each data point is sized in proportion to some metric, such as (in our example) each country’s population.

What did you absorb?

Now, here’s your audience participation exercise. Do this first for one of the above two graphs, and then repeat the exercise for the other:

What did you just learn? My sense is that if you’re a reasonably astute observer, you learned from the Gapminder graph that there is a clear correlation between per-capita income and life expectancy. You might also notice fairly close regional groupings—for example, most of the African countries (the blue bubbles) are at the low end for both income and life expectancy, while the European countries (the orange bubbles) are at the high end.

By comparison, the takeaways from the Best in Show graph are much less global, and much more likely to differ from one observer to the next. You could certainly look along the edges to see which dog breeds were most popular along the top, or which were the best dogs—or at least the best dogs based on the presenter’s datadog score metric—down the right side. But how easy or hard would it be to learn from this graph which of the sporting dogs you might want to buy? Or where your own particular favorite dog breed fits in?  Did you understand how each dog breed was scored? Did you agree with that approach? For my money, this presentation cries out instead for a table with each breed attribute as a column, so you could easily find or rank the breeds—a spreadsheet with filtering turned on (to use the Excel terminology) would do this nicely.

There’s no question that each of these graphs was carefully thought out, with the graphs created by a skilled, imaginative professional. Each took an immense amount of work to produce, I’m sure. Even so, consider each of the design and layout choices—such as color, data point size, supporting elements, type size, etc. How much does each of these choices make it easier to grasp the graph’s main points? Or harder? Can presenting a lot of data get in the way of making a point strongly?

This whole conversation illustrates the difference between data and information. Data visualization is an immensely powerful tool, but a few wrong choices by the information presenter can not only cause a graphical presentation to be less effective than a well-designed table, but perhaps even cause the audience to question the presenter’s agenda.

There are four basic questions that an FP&A professional should ask him/herself before creating a graph… questions that we ask ourselves all to infrequently. At AFP’s upcoming FinNext conference, we’ll talk about those questions, and avoiding the tragic consequences that can result. I look forward to seeing you there!

Randall Bolten is chief executive officer of Lucidity and author of “Painting with Numbers.” Don’t miss his session, Data Visualization: The Four All-Important Questions We Often Forget to Ask Ourselves, at FinNext, March 18-20 in San Francisco. Register here.