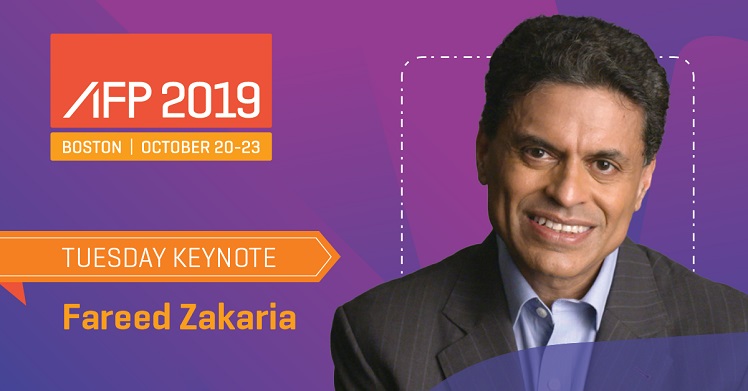 In an in-depth interview, we discussed the political risks of today and how they mirror key developments throughout human history. Because Zakaria is so thoughtful about geopolitical affairs—and because he is universally regarded as unbiased, objective and diplomatic—he was invited to speak at AFP 2019 this October in Boston.

The following are four key takeaways from our interview.

Overcoming the risks of today will take strong leadership, much like in the past. “I'm an optimist, because I tend to look back historically and we've seen these moments in the past, and we've seen democracies come through them and adjust, making necessary reforms and even maybe dialing back a little bit. But it's not inevitable. We did get through the rise of populism and anti-immigrant feelings and the assaults on democracy in the 1920s and 1930s, but it took a great depression, a World War and extraordinary political leadership from people like Franklin Roosevelt. It tells me that it could have gone another way and it could go another way. So I mean, we're not going to combat these forces just automatically. There will have to be active leadership that takes us there.”

We are living in a “Post-American World.” This is not due to the decline of America, but the rise of everywhere else. “There may have been a point at which you could have said that the west should have in some way kept all the intellectual property to itself and ensured that the rest of the world never advanced. But that's not really plausible and it's also important to understand that would've meant a very much smaller and a more stagnant world economy.

“By opening up the world and allowing for a kind of single system in which everybody participates, we've massively expanded the global economy. We've massively expanded the opportunities for everybody. And most American companies, still employ millions and millions of people. But I think about 50 percent of the profits of America's 500 largest companies come from overseas markets. So I don't think you can stop it. It is a process that has enormous opportunities, but real challenges.

“So if you look at Americans with college degrees, who live in and around one of the 30 metro centers in America which are the real centers of economic activity and whose work in some way involves some skill, they're doing fantastically. But if you don't have a college degree, if you live in the rural part of the country and you don't have any specific skills, you're in a tough place, because what you do can be done by somebody in China at 10 percent of the price or it can be done by a machine. So you have to ask yourself, how do you do something that can be done by somebody in China and can't be done by a machine?”

Due to the rise of other nations, the nature of competition between global companies has changed. “In the first phase [of globalization] the American companies did fantastically, because they had two things—capital and knowhow. They were the players that could come into a market and provide enormous amounts of capital. That was on a scale unimaginable in China or India. And they understood that they had much more sophisticated systems of corporate management, sales, marketing, etc. They had more computers in their supply chain so everything worked better, and more efficiently.

“If you go to a country like India now, and you say, ‘I'm a Western company and I want to do business there,’ the first question you have to ask yourself is, ‘What are you bringing to the table?’ There are now billions and billions of dollars of private capital in India. The Indian companies operate at global levels of efficiency. And they obviously have much more sophisticated knowledge of the local market. So you have to ask a question that you didn't have to ask 20 years ago.

“What do you bring to the table? How are you adding value? What is it that you distinguishes you? Now, if you're a Facebook, you have an answer to that. If you're an Amazon, maybe you have an answer. But there is an Indian competitor called Flipkart, which is giving Amazon a real run for its money. If you're Google, you have an answer to this question, but if you are a real estate company that is used to coming into these places and saying, ‘Look, I've got a lot of capital so I can dominate this new market,’ that's not going to be so easy. And that has been the experience.”

Competition between nations, particularly China and the United States, has far-reaching implications. “We're now entering a different world. We are entering a post-American world in which the rise of China and the rise of other countries is reshaping the balance and stability of many key parts of the world. I'll give you one example of that. You see the way in which the rise of China is now producing a reaction in America, that is epitomized by the Huawei ban. Now, if this goes through—and I'm not sure it will—but if we continue down this path, where the United States government is essentially trying to kill Huawei, the Chinese are going to decide that they have to develop an indigenous self-reliant technological capacity around software and hardware, the chips in particular.

“In turn, that will mean that countries will have to ask themselves, ‘Do you want to be in a situation where the Chinese or the American government could cripple you technologically by forcing their companies not to do business with you? And would you want to double that risk by having both Chinese and American components in your, in your system, in your supply chain?’ So then you're going to start seeing the bifurcation of the world into almost two technology zones. A bipolar world of technology. That's a very different world than we've had for the last 30 years. And these kinds of issues, I think, are going to become much larger.”

For more insights, the full interview is available on the AFP Conversations podcast. And don’t miss Fareed Zakaria’s keynote presentation, Navigating the Forces of Global Disruption, at AFP 2019.