Ex-Joint Chiefs of Staff Chairman on Being a Trusted Advisor 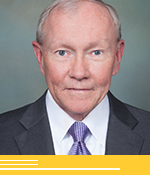 Dempsey will serve on a keynote panel at the 2016 AFP Annual Conference, Oct. 23-26 in Orlando, Fla. Joining him are Presidential historian Doris Kearns Goodwin and economist Nouriel Roubini. Moderating the panel is journalist David Gregory.

Learn more about the AFP Annual Conference Sunday Keynote and be sure to register by September 16 to save $200.

[Ed. note: This conversation has been edited for clarity.]

AFP: How do you go from being a West Point graduate to the senior officer in the Armed Forces? What do you think propelled you?

Dempsey: This is not what could be seen as false modesty, but I honestly believe that there are two things. One is I was told early on by some mentors, bloom where you’re planted. To continue to pile metaphor on metaphor here, don’t get out over your skis. Don’t get in front of your headlights. Do each job you’re given. Especially the harder jobs, do them as well as you can. If you do them well, then good things will come of it. If you do them as well, at least when you’re sitting on your rocking chair, you know you gave it your best.

And so I took it one job at a time with the constant theme being that I really believed that the young men and women who served with me and who were part of my team and spent a great deal of time thinking about their well-being and the country’s well-being.

And then the more senior you get, leadership is interesting in the sense that early on in a career, whether it’s military or corporate America, you tend to succeed mostly by focusing down on the organization beneath you. As you become more senior, you soon reach the point where you have to focus laterally and down. You have to get the cooperation of your peers to succeed. And then when you get to the very top of organizations, you find that you have to focus most of your attention up in order to provide the proper policy guidance and resources and such to take care of those young men and women at the other end of the leadership spectrum. So leadership is very dynamic. I’ll use my case, if I ended my career exactly the same as I started it, then I probably missed a lot of opportunities, but I do think I learned along the way.

Dempsey: Well, first, in terms of them having different agendas, I mean I can speak with complete confidence that both of them had one agenda, which was trying to do what was best for the security of the United States, which was my portfolio. They may have had other domestic agendas and so forth, but we found common ground in the idea that the world was changing around us and we needed to make sure we continue to protect our people, our overseas facilities and our interests.

I actually teach a course right here at Duke University in the business school that I describe as the attributes of the trusted advisor. Let’s take corporate America. These kids are going to graduate from Duke University, Fuqua Business School but they’re not going to be CEOs the day they graduate. Some of them actually think they may. Most of them are going to be disappointed. The point is they have to first figure out how to be junior leaders and then trusted advisors to very senior leaders, and then at some point, potentially they matriculate in to the ranks of senior leadership.

So I have put a lot of thought in to how to be a trusted advisor, and I did that for four years with President Obama, the four secretaries of defense. I also had the responsibility to consult with Congress on issues of national security, and I was an advisor as well to the National Security Council. Those were all very different environments, but I learned a lot as I went.

Dempsey: Well, we can unpack this a bit in October, but it would be hard for me to say one particular trait, but I’ll offer you a couple off the top of my head. One is humility. I mean, if the trusted advisor has an instinct to outshine or overwhelm or in many ways try to have the spotlight, then the person you’re advising is going to wonder about your motivations. So I think there has to be a genuine sense of humility. I certainly felt that dealing with the huge issues with the national security that we’re dealing with. But I do think it’s one of those attributes that’s important in building trust is a sense of humility, a genuine sense of humility about what you’re being asked to do.

And the other one is—I said I’d only mention two of probably six or so—but two for me would be I describe it as being relentlessly inquisitive. What I mean about that is the trusted advisor has to be able to provide their advice and be mindful of what the CEO or the President or the secretary of defense kind of have or are confronting at a particular point in time.

So timing really matters in providing advice. If I had kind of mindlessly stumbled over to give advice to either the secretary of defense or the President and was not mindful of the other things they were trying to accomplish, the other challenges whether it’s a particular time of the year when the budget is dominating or you recall with President Obama, there was a period where healthcare dominated his thinking. Then there were times when he was getting ready to travel, let’s say to China. And if you approach them at those times, I mean if there is a crisis, of course, you approach them, but in the day‑to‑day activities, if you approach them at the wrong time, you’re likely not to be providing them the kind of assistance they count on you to provide.

Read an expanded version of this interview in an upcoming issue of AFP Exchange.