Business Financial Reports: How Should They Look?

All too often, financial reports fall somewhere between messy spreadsheets and dashboards, full of poorly labelled and inappropriate charts, that simply do not get the message across to the decision-makers.

Countless reports and presentations are created throughout organizations on a daily basis, all in different formats, lengths, shapes and colors, depending on preferences of the person who prepares them. The end results are often managers not making their way through the data presented, time being wasted, and important decisions failing to be made.

In 2004 Dr. Rolf Hichert, the renowned German professor, took on a challenge to standardize the way analysts and controllers present data in their reports, dashboards and presentations. His extremely successful work culminated in 2013 with the public release of the International Business Communication Standards (IBCS) the world’s first practical proposal for the standardized design of business communication.

The IBCS consistently define shapes and colors of actuals and budgets, variances, different KPIs, etc. Often referred to as the “traffic signs for management”, the IBCS are a set of best practices that went viral in Europe and have solved business communication problems in numerous companies such as SAP, Bayer, Lufthansa, Philips, Coca-Cola Bottlers, Swiss Post, etc. 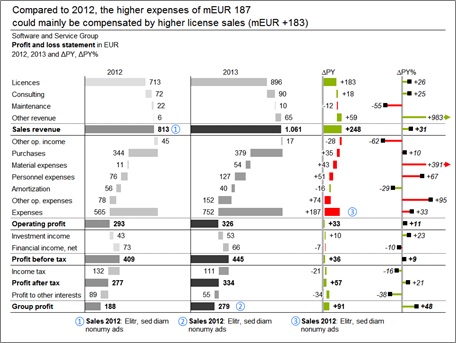 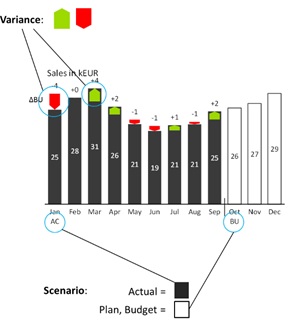 The variances are explicitly calculated and visualized. Positive variance is green, negative is red. The user’s attention is guided to the variances, which are in this case the key to understanding the sales performance.

The values are explicitly labeled at the most appropriate position on the chart. All texts are standardized, exact, short and displayed horizontally.

However, the IBCS standards are not just about charts. They include extensive rules and recommendations for the design of business communication that help:

After you apply the IBCS rules to your standard variance report, it will look something like this: 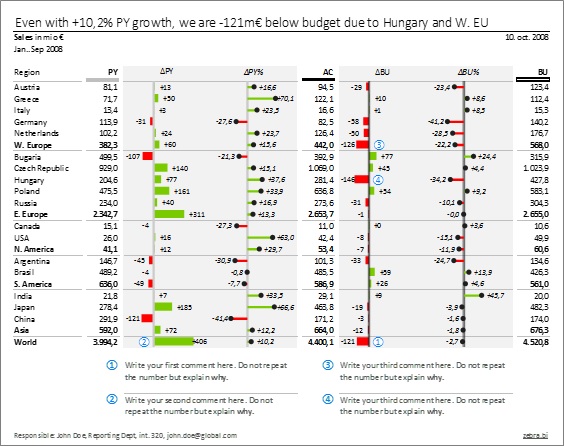 As you may have noticed, this report has several distinctive features:

Andrej Lapajne is the CEO at Zebra BI and a founding member of the IBCS Association. He will discuss IBCS standards, along with Ozlem Karapanli, financial service manager for Coca-Cola Içecek, at the 2015 AFP Annual Conference on October 19. The IBCS is offering a full-day workshop in New York and a free half-day workshop in Washington.

A longer version of this article appears in an upcoming edition of AFP Exchange.