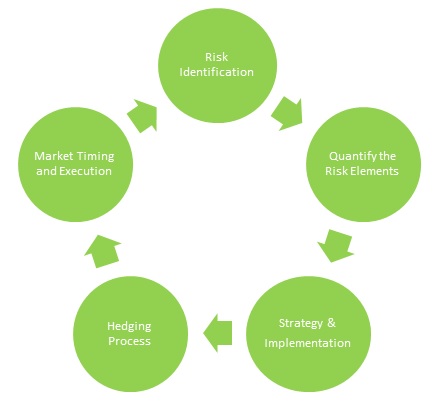 Businesses continue to look internationally for ways to grow revenue and overall market share and potentially reduce costs associated with operations. With the current strong dollar environment, these same corporations are beginning to take risks associated with foreign currency fluctuations much more seriously than in years past. According to the 2016 AFP Risk Survey, currency volatility ranks fourth on the list of key risk factors that will have the greatest impact on organizations’ earnings in the next three years. This is the first time currency volatility has appeared as a top five risk factors in the last four surveys.

Rightfully so, currency volatility has been on the mind of CFOs and treasurers all across the country as the U.S. dollar has been in a position of strength over the last couple of years. For example, from January 1, 2015 to February 1, 2016, the euro has lost 10.09 percent against the dollar, and the situation only gets murkier when looking at the percentage lost from January 1, 2014 which stands at 20.90 percent. This current dollar strong environment remains consistent against all major currencies.

So what is a finance exec with operations or business overseas to do? Try this five-step approach:

Risk identification: The first step in the risk management process for corporations is identifying the net exposure. Net exposure is the exposure that a business will need to know to go to market.

Quantification: The next step is measuring the potential impact of the FX risk. A question often posed at the board level when discussing foreign exchange risk and hedging is, what’s the risk? Analysis can be done to look at the average impact of having the risk over the last 10 years as well as looking at the most and least extreme moves.

Strategy and implementation - writing a FX policy: After the identification and quantification steps, a corporation needs to decide upon its objective. What is it trying to achieve from its hedging policy? Typical objectives for a corporation include protecting its budget rate for its financial year or minimizing volatility.

Hedging process: Once objectives have been fully discussed and decided upon, then hedging timelines should be established, for example, how far forward the business can hedge and what the percentages are of hedging.

The goal of risk management is to have the sweet spot of hedging in place at all times. By this we mean that there is always enough volume of cover to protect the business from adverse moves in the currency markets, while at the same time, not being so over-hedged that the business can’t take advantage of favorable moves. Flexibility is key, and can best be achieved by introducing bespoke minimum and maximum percentage levels of cover for each period. The framework and strategy can all be signed off by the board, thus allowing less onus of ownership within the finance team.

Market timing within an FX policy: Once the strategy has been set, the team should implement the minimum level of hedging. This decision should not be led by the market rate, as it is the required minimum level of hedging. Next, a business can decide whether to add more cover depending on where the market is dealing and perhaps set some target levels for adding cover.

Val Jagar is head of corporate services at HiFX.