Lisa Jaster on Being a Female U.S. Army Ranger: "Don't Let the Quit In"

In this episode of AFP Conversations, guest Lisa Jaster talks about quitting -- or, to be precise, not quitting.

In 2015 at the age of 37 Lisa Jaster became only the third woman to graduate from U.S. Army Ranger School, which 36 percent of students fail within the first four days. Now a Major in the U.S. Army Reserve, she’s also a mom, wife and an engineer for Shell Oil. "Don't let the quit in," she says. 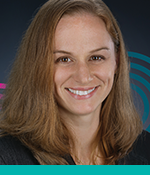 Lisa Jaster is a 38 year old mother of two and a military spouse with a career as a project manager.  She is also an Army Reservist.  In October 2015, Lisa graduated from Ranger School, the Army's Premier Leadership Training, and continues to demonstrate that barriers are meant to be broken.